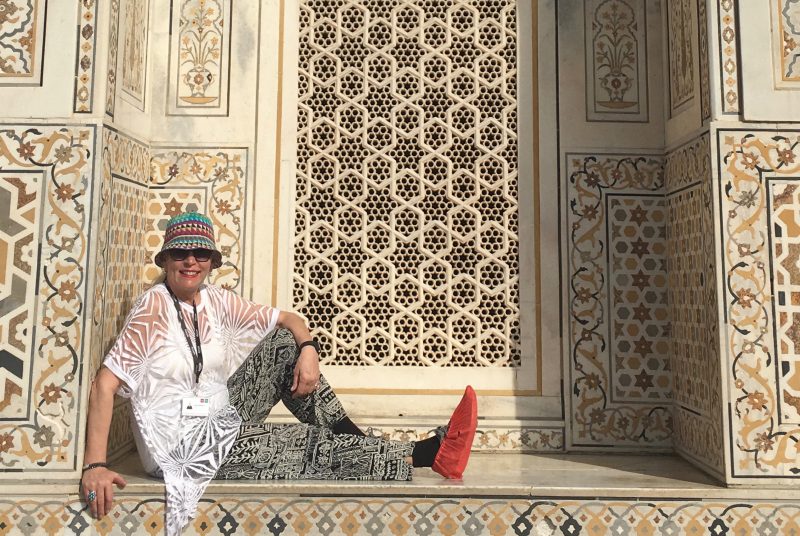 I love to travel and am always ready to pack a bag and head for the next adventure. I therefore, needed little encouragement to get ready for a trip to India a few weeks ago. This was my first visit to Incredible India, as the tourism tagline calls it. I was excited, in particular to see the Taj Mahal, which had been on my bucket list for a long time.

Whenever I get ready for a trip, I need to ask myself the same question: “How can I get through this one with my food intolerance?”

PLANNING MAKES ALL THE DIFFERENCE

I’ve learned that it’s easy if I plan well. One of the things I have to avoid is gluten. On weekend trips, I can usually take a few slices of gluten free bread with me to use at breakfast. As to India, that would not have worked.

I solved the breakfast issue, by creating an oatmeal mixture with chia seeds, a dash of cinnamon and Himalayan salt and a spoonful of raisins. I put every daily portion in a zip-lock bag and packed them along with all my vitamins for the trip.

I also packed a special formula from an Icelandic herbalist. She’s been making it for a while for people who go to India. The formula is basically meant to ensure you don’t get a Delhi stomach, which in other words means diarrhea. It worked as promised and took me safely through the trip.

I try, when I travel, not to build up too many visual images of what will and will not happen. I find it better to take each day as it comes. This time though, I was very excited at the prospect of finally seeing the Taj Mahal. It is such a magical symbol of everlasting love. After one day in Delhi, I was happily on my way to Agra, where the mausoleum stands on the banks of the Yamanu River.

I got butterflies in my stomach, when I spotted it from a distance just before arriving at Agra. After lunch at the hotel (I stayed at the Ramada Plaza in Agra) it was finally time to visit the Taj.

When you see something in real life, that you have only seen in pictures before, you get a totally new perspective of it. It makes no difference whether it’s landscape or a monument like the Taj Mahal. This was my experience, once inside the forecourt, where the symmetry and beauty of every part of the structure was apparent.

I walked through the gate to the inner garden and saw the Taj Mahal right in front of me. I immediately felt and incredible feeling of love come over me and was almost moved to tears. This magnificent monument was built as a mausoleum (grave) for Mumtaj (Taj) Mahal, the beloved wife of the Mughal Emperor Shah Jahan in the 16th century.

The white marble, the beautiful inlays of various stones, the carvings in the marble, the towers and the little lake in the centre of the garden. Everything is so beautifully designed and created by thousands of hands, all in memory of this one woman. I found it breathtaking to be in the presence of such a masterpiece.

I had in a visualisation many years ago, seen myself sitting on the bench in front of the Taj Mahal with a tall, dark haired man next to me. I guess that was before my hair turned white, as it does for most people my age.

Now, here I was at this symbol of everlasting love, feeling a bit like the late Princess Diana. Do you remember that photo of her, when she sat alone on the bench in front of the mausoleum? I guess this feeling surfaced, because everyone around me was having pictures taken with partners. So, I decided to ask the tour’s guide to sit next to me for a photo, which he agreed to do.

It wasn’t until we were about to leave after our inspiring visit, that I recalled my visualisation. I laugh when I realised I must have forgotten one important detail in the visualisation process, which I had done after the loss of my late husband.

I had forgotten to see the man I was with at the Taj Mahal, as my partner. This was a huge lesson, and I will definitely be more specific next time I visualise something.

Every day turned out to be an adventure on this India tour. On our way from Agra to Jaipur, we stopped at a small farming village called Baswa in Rajasthan. I was told I could walk around and go into one of the sparsely furnished village houses. I felt a bit like an intruder, partly because I could not ask their permission myself. Language tends to be a barrier at times.

Most villagers live in a very self-sustainable way, normally with one cow per household so they have milk. They grow their own food and in front of one of the village houses, two women were pounding wheat. I, the only gluten free person in the group, was invited to try my hand at pounding – which I happily accepted.

At first I made a mess of things, and the women laughed at my clumsiness.  But with sign language they taught me how to do it correctly. And for a brief moment I was connected to them, and they to me.

Out of curiosity, I asked whether the women in the village had been to school. They had not, but I was told the children now go to school. I truly believe that education is the only way out of poverty. It is so important for women to get a chance to learn at least to read, write and add numbers.

In order to support women in rural areas of India to go to school, I’ve signed up as a supporter of www.careindia.org. I trust that my donation can make some difference.

I’m jumping from one part of the trip to another. If I would write about the tour in detail this post would become much longer than it already is. The Agra Fort is an incredible structure. Riding on elephants up to the Amber Palace in Jaipur is quite unique – but seeing the sun rise on the Holy river Ganges is an unforgettable experience.

It was still dark when we left the hotel, to by bus, then by rickshaw, and then finally walk through the narrow streets of Varanasi, the oldest city in the world. The streets led us to one of the Ghats (steps leading down to the water) by the Ganges, where our boat was waiting. The boat was long, rather wide, probably built like they have built them through the centuries – and two young oarsmen helped us board.

There is something very special about the Ganges, this holy river of the Hindus. It holds an energy all its own. The spiritual power I sensed once on the river touched me deeply. Paradise Holidays India Pvt. Ltd., who handled the tour, had arranged for a sitar and a tabla player to be onboard the boat, to play classical Indian music for the group.

EVENING ON THE GANGES

Watching the bodies being cremated in the open like this, is quite unique. The wooden pyres are on or below the steps of the Ghat, men from the lowest cast build the pyres, help arrange the bodies on them, and then add more logs before the fire is lit.

It is customary to break the scull before the cremation to release the spirit from the body. That is the task of the oldest son. While I watched, I could see at least five bodies, either on the funeral pyres or waiting to be cremated.

Cremation is a sacred and private ritual, a bit like the wakes we hold for our loved ones in Christianity. In a way, we as onlookers, were intruding by taking photos. But I still took some, as you can see from the one above.

PRAYING FOR MY FAMILY

Night was falling, as the boat moved into the the middle of the river. In the fading daylight everyone lit candles, placed in little flowerbeds. The custom is to send out a prayer as you let them float on the river.

I have for many years, wherever I travel, lit a candle or an incense in every church or temple I visit, and prayed for my family. This time I sent my prayers away on the Holy river Ganges, by saying: “Om namah Shiva.”

It’s a call to the supreme God Shiva, from whose head and hair the river was born.

Sending you Love and Light
Runa, The Icelandic Health and Lifestyle Coach

Read more about Runa’s travel in India by clicking on INDIA IS INCREDIBLE.

Runa Bergmann
Runa Bergmann is a Keynote Speaker, published Author and a Health and LIfestyle Coach. She has successfully been working in the personal development field in Iceland since 1990.
>> Feel free to contact Runa

Runa Bergmann
Runa Bergmann is a Keynote Speaker, published Author and a Health and LIfestyle Coach. She has successfully been working in the personal development field in Iceland since 1990. >> Feel free to contact Runa
More in Runa's Travel